We respect your inbox. We only send interesting and relevant emails.

Dani Fleming, the principal of MA Properties Online, has been involved in real estate for many years...

In this blog we detail the mid-year market summary that covers the period Jan 2008 through June 2017 and provide projections on how we see home sales for the rest of 2017. The full 20-page Lexington 2017 Market Summary will be available in January 2018. Please contact us if you would like to get a copy of the Lexington 2016 Market Summary that was published in early 2017.

The key finding of an analysis of the 2017 year-to-date real estate sales is the continued drop in the number of single family homes sales. There are two reasons for this drop:

Housing inventory is a monthly snapshot of the number of homes available to buy. The bottom of the market was in 2009 when the number of homes available for sale were at historic highs. The available inventory dropped to the lowest levels seen in a decade in 2013, and this trend continued in 2014, 2015, 2016 and 2017. With such low inventory, this raises the question; "Is this caused by low supply (fewer sellers in the market) or high demand (increasing numbers of buyers wanting to buy a home in Lexington)?" The following graph (Home Sales) shows that this is caused by increased demand because we have seen only minor changes in the number of homes selling in Lexington. 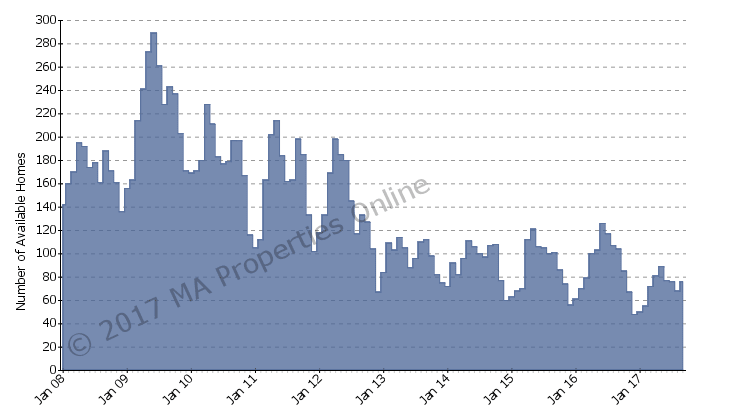 The total number of homes sold per year has been relatively static since the Lexington housing market recovered from the downturn in 2008/2009. Since 2012, the number of homes sold that come on the open market via MLS, was approx. 360-380 per year. It is important to note that 12% of sales in 2016 were direct-to-builder off market teardowns; we do not anticipate this will change appreciably in 2017. With such high demand in the market, especially at the lower price points, these sellers would be better off selling on the open market. With relatively static supply, it is increased demand (highly rated schools, convenient to Boston, community dynamics) that is the reason for the reduced inventory levels we are seeing in today's housing market. 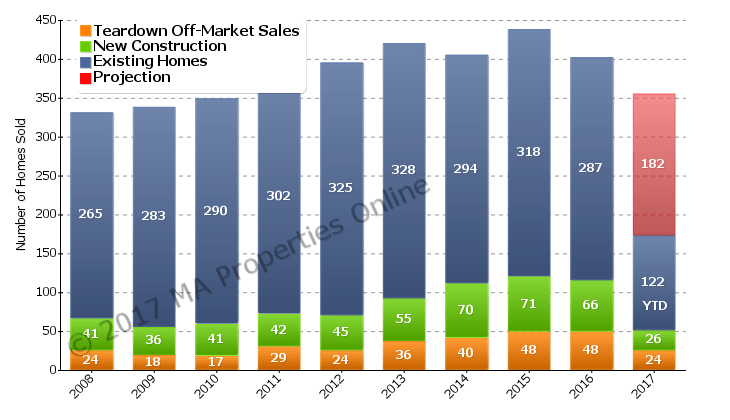 High demand leads to appreciating prices, and average home prices in Lexington are at an all-time high. Home prices are rising in almost all towns in Eastern Massachusetts - in the 'in-demand' towns (towns with strong school systems and close-in towns) prices started to rise immediately after the lows of 2009; whereas in towns with less demand (towns with not as strong a school system, and further out from Boston) we saw prices remain flat and only begin to rise in 2013. In Lexington, after rising steadily since the downturn in 2009, the average home price peaked in 2014 and remained flat in 2015 (for technical reasons due to the impact of the severe winter experienced that year). 2016 and the year-to-date 2017 data show a return to rising prices with average home prices at an all-time high of over $1.275 million. 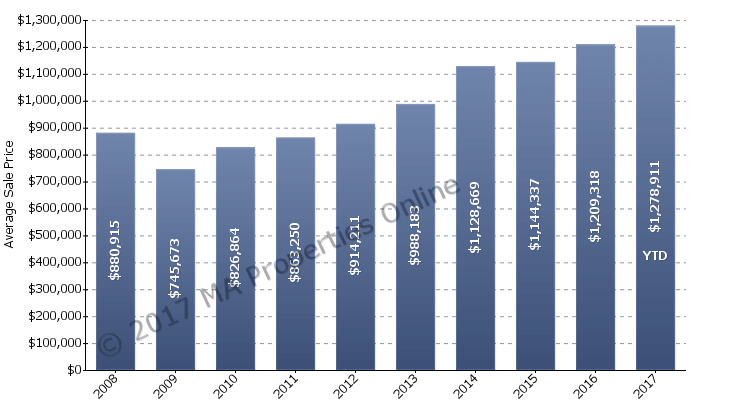 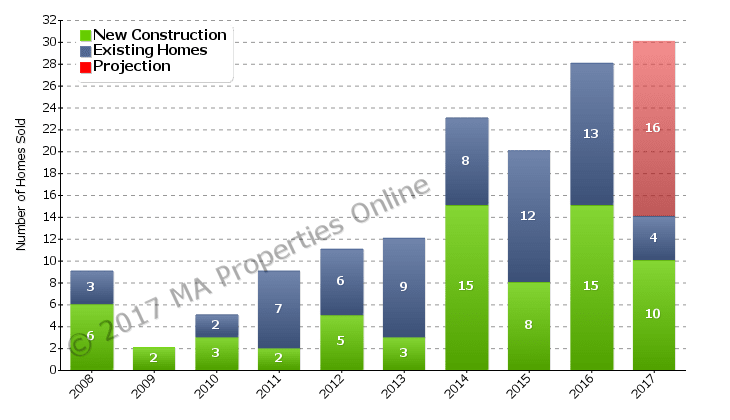 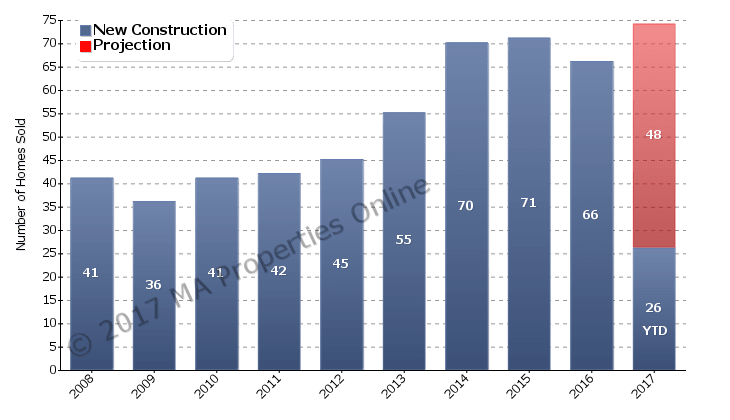 We have seen a dramatic increase in the number of rentals - 2015 was 25% higher than 2014 and 2016 was 30% higher than 2015. We project a slight reduction in the number of home rentals in 2017 but still higher than we saw in 2015. This has been driven by two factors. Firstly, an increase in the number of investors entering the market driven by the promise of high returns because of the popularity of the town and the difficulty in buying (buyers are resorting to renting while they find a home to buy). Secondly, existing homeowners renting instead of selling as they look to continue to take advantage of the home price appreciation we have seen in recent years. The increasing number of rentals is having a dampening effect on home sales which have plateaued since 2013 as these homes are just not coming on the market for sale. 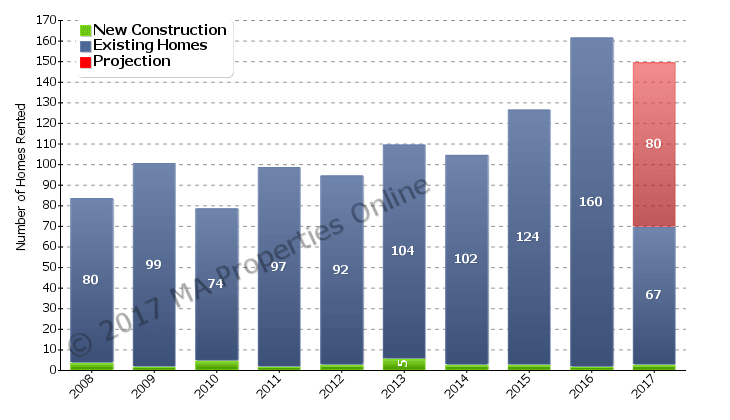 Statistical Information about other towns can be found on our website under Statistics. The full 20-page Lexington 2017 Market Summary will be available in  January 2018. Please contact us if you would like a copy of the complete Lexington  2016 Market Summary.

Read a full copy of the Lexington 2016 Market Review

We respect your inbox. We only send interesting and relevant emails.

We use cookies to enhance your browsing experience and deliver our services. By continuing to visit this site, you agree to our use of cookies. More info